Authors Note: This paper has be divided into three parts because of the length of the full document. Much like the stories told in serials during the 1800’s, the next paper will pick up from where the last one left off. The second paper will be posted next month with the third to follow the month after. Thank you for your patience. 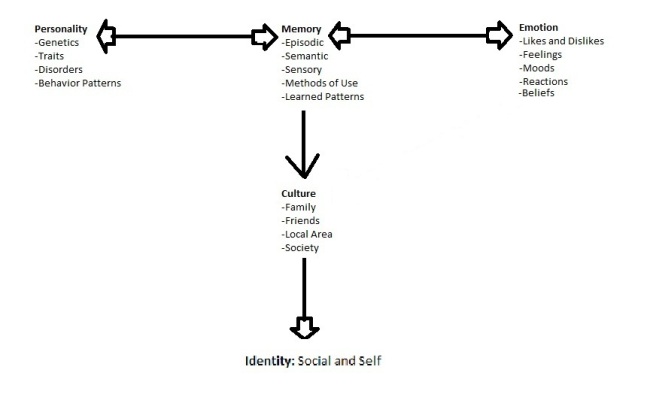 Sense of Self: A New Theory of Identity and Personality

After reading a few thousand plots and spending a number of years studying humans thinking, feeling and moving; one begins to see patterns. Novels are a great example of what will draw people to read and invest, such stories as a ‘true love plot’ or the ‘over-coming an enemy’ plot, but one plot is the most compelling and drawing to the audience: the ‘coming of age’ or ‘finding one’s self’ stories.

Why are these plots of novels being addressed here? This is the simplest answer: because it deals with how we become the people that we are. How we become who we are and what we think we are is a never ending source of fascination and has sparked many different debates in the ‘how we become” and “what we are”. Some of the debating has gone so far as to digging inside of the brain to find the on/off switch and other have turned to magic and philosophy for answers… but none have been found to 100% satisfies the appetites of those that wish to know the ‘how’ and ‘what’ of the individual. Examples of this have included the work done with Clive Wearing (the man with no memory) after he lost his memory, testing of hormone levels in the brain and even the efforts to control bodily possession by spirits, palm reading, and the Ancient Greek humor system.

This paper is going to propose a different way of thinking about what we are and who we are, but taking a different look at how we present ourselves. A professor asked once, write a list of who you are, your identity, and I wrote down my name; this was not the goal of the assignment but the wheels did start turning on how we are taught to identify ourselves. This paper is going to show how identity is the complicated part of who we are, not the personality.

The major point of this paper to convey an idea, and not to recite resource after resource of different works by many different people; the definitions are developed by the author to explain the idea with simplicity. The goal is presentation and argumentation of an idea. Flaws in the idea because it does not fit with the goals of a different author are not a flaw in the idea. If there is interest in expansion of the base concept presented in this paper, it will be produced at a later time. Citations offered will be limited to improve brevity.

The simplicity of the definitions and the diagrams is to not only help with comprehension but to also encourage flexibility for factors that the author might have missed and encouragement to expand in the future. Theories are observation, rationalization, and art mixed together into a picture that is moving and stationary at the same time. Many have debated that Warhol’s soup cans are art, focusing on issues of whether it is good, or has a point. Opinions will vary and fresh ideas will expand or at least give us clearer ideas the world we live in; just like abstract art.

To assist with the understanding, there is a diagram provided at the top of the text and there is an item by item review of each branch of the diagram, an explanation of the interactions of the different branches, several examples of how the model works in a functional environment and the final sections will focus on possible flaws that the author has observed and the arguments to whether these are serious flaws or benefits to the theory. No theory is 100% perfect every time and the flaws should be seen, known and addressed.

In addressing the future, remember the past; for they walked this ground before.

Who are we, what are we, and how did the ideas of ‘the self’ get to where it is? The history behind ideas of personality and identity date back to the oldest documents of medical care and science. Some of the first questions asked in medical science dealt with the idea that there is something inside of each of person that makes them who they are. Aristotle and Plato were some of the first to debate this subject with regards to what the primary factors that play into the development of the person’s uniqueness. The examination of what is nature and what is nurture started with the Ancient Greeks and was called “Nativism” and “Philosophical Empiricism”. “Nativism” purposes that there is much of the individual that is inborn and innate, leaning to the idea that a personality is a fixed object at the time of birth. While “Philosophical Empiricism” suggests that a person learns all that they are from their environments (Schacter, Gilbert, & Wegner, 2013).

While this debate has gone on for several thousands of years, there is still no specific rule as to whether, the innate/inborn or the learned has greater influence. Each set of thinkers, scientists, and philosophers has leaned more one way or the other, while many have made an effort to remain in the middle of the discussion saying that the influence is 50/50. Research has committed decades of work to the topic and still has no solid concert answer.

The search for the personality and by philosophical extension, the soul, has also driven theorists to attempt to come up with new and different explanation for the development and strength of the personality. Carl Jung believed in the influence of spirituality and roles in the world through his archetype theory but also developed the original idea of the mix and match traits (Craver & Scheier, 2012). Many theorists have taken the idea of the humors (four element system [earth, air, fire and water] found in most cultures) of Greek Medicine and tweaked the ideas to fit more with modern beliefs, such as seen with “The Color Code” by Taylor Hartman. Then there is the belief that a higher power provided the personality to the individual and it is visible through markings of the skin (witch trial documentation and notes in the Christian Bible indicating this belief [statements like the lepers are judged by god to be of bad character]) and the use of star maps to explain the individual differences and similarities. No matter how many different ways in which there is to examine, explain, and decode the development of the personality, it has come back to the nature verses nurture debate. Even now with new technology working hard to locate the genes of the personality and the parts of the brain personality is hidden. At the end, how the personality is developed, maintained and transmitted is still undetermined and debated.

Everything and Nothing of What Once Was

To comb through personality theories takes a great deal of time, and in many ways there are ties from each theory to the next one. Each theory moves forward with a piece or pieces of the past theories and it is no different for this theory. This theory attempts to honor all of the theories that came before it while also being a new and more inclusive explanation of a concept that has been very difficult to understand and define.

It should be said at this time that theory would not work if it did not stand on the shoulders of so many theories before it, and as each section is described and explained, it will be obvious to the intense students of personality theories, what is being included. All of the greatness from before has helped to lead the way to greatness in the future and this idea of the sense of self is an example of how the transition is to be approached.